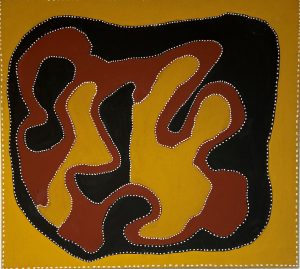 Rusty Peters is a senior Gija man of Juwurru skin. His bush name Dirrji refers to dingo pups looking out of a hole at the sunrise. He was born under a Warlagarri or Supplejack tree on Springvale Stationsouth west of Turkey Creek the same day as his jimarri or agemate Charlie McAdam. His spirit came from a crocodile his father had killed when his mother became pregnant.

He grew up in Springvale learning traditional law and working as a stockman and other things such as welding fences and stockyards. When his father was killed in a tragic riding accident at Roses Yard, the family moved to Mabel Downs where he became renowned as a horse breaker. He lived for some time at Nine Mile reserve at Wyndham after the introduction of award wages forced people off stations but then moved to Turkey Creek where with other senior Gija artists such as Hector Jandany and George Mung-Mung he helped start the school.

As part of the Gija cultural program, he took groups of boys out bush, showed them how to make spears and hunt and to make a camp without matches or blankets in the traditional way. He also worked in the Gija language maintenance program. In 1989 he moved to Kununurra where he was employed at Waringarri Aboriginal Arts as an assistant. He was a long time friend of Rover Thomas, caring for him on most of the trips he made in the later part of his life. He made prints and did some painting while working for Waringarri Arts.

He moved to Crocodile Hole when Freddie Timms based the Jirrawun Aboriginal Arts group there in 1997 and began to paint on large canvases. His detailed knowledge of the land and stories from Springvale and neighbouring Moolabulla stations is reflected in distinctive paintings in traditional red and yellow ochres and black charcoal. While recognisably part of the ‘Turkey Creek’ style the intricate curves mapping the country and the dark caves and rivers in the pictures are particular to Rusty’s work. In early 2000 he collaborated with Peter Adsette, a white artist from the Northern Territory University. Each artist completed seven canvases taking turns to paint in response to each other. These paintings were shown at a joint exhibition “Two Laws, One Big Spirit” at 24Hour Art, Darwin in September 2000. The Neminuwarlin dance group performed at the exhibition’s closing ceremony. This acclaimed exhibition toured Australia during 2002-2004.

In 2015, Rusty was a finalist in the 32nd Telstra National Aboriginal and Torres Strait Islander Art Award, and in 2017, three of his paintings were featured in Defying Empire, the exhibition of the 3rd National Indigenous Art Triennial at the National Gallery of Australia Canberra, and later at the Museum and Art Gallery of the Northern Territory. In 2018, at age 84, Rusty painted a 5-metre triptych depicting his inimitable East Kimberley night starry skies over Darrajayin, his ancestral land. The beautiful and moving painting was acquired by ARTBANK, an entity of the Australian Government specialised in loaning and rotating the works of Australian artists in private and public institutions.