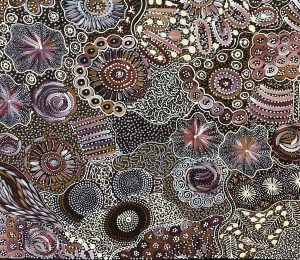 Janet Golder Kngwarreye is an Anmatyerre woman born in November 1973.  Her traditional country is Alhalkere, situated 250 km North East of Alice Springs in the Utopia Region of Central Australia. She is the eldest of five children to Sammy Petyarre and Margaret Golder.  Janet is married to Ronnie Bird Jungala and they have four children.

Surrounded by artists, Janet developed her artistic skills from a very early age as she watched and learned from renowned Australian artists such as her aunty the late Emily Kame Kngwarreye, her uncle’s Greeny Purvis Petyarre and Kupptji and her aunties, the well-known Petyarre sisters, just to name a few.

The theme for Janet’s paintings relates to the main women’s stories from her father’s country.  Ntyerrm – the bean and seeds from the awenthe – dogwood tree, arnkerrthe – Mountain Devil Lizard and awelye– women’s ceremonial body paint design for these stories.

Her work has been represented in many group exhibitions and can be found in many private collections both in Australia and overseas.