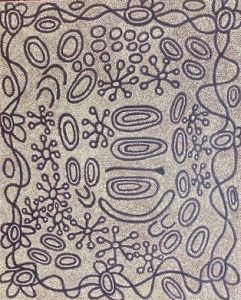 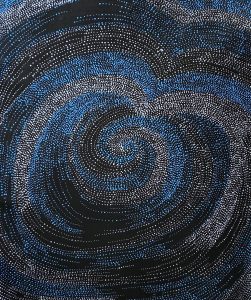 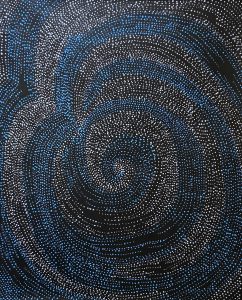 Margaret Lewis Napangardi is a Warlpiri woman who was born in the mid-1950s on Mt Doreen Station, northwest of Alice Springs. Margaret is the sister of the famous artist Dorothy Napangardi Robinson and the daughter of esteemed artist and senior lawman Paddy Lewis Japanangka. Margaret was brought up the bush in the Mina Mina area of the Warlpiri lands. This area and its dreamings form part of the recurring themes in her paintings. Margaret lives at Yuendumu, about 300km northwest of Alice Springs with her skin sister Judy Watson Napangardi.

Mina Mina Jukurrpa relates to a prominent Women’s Dreaming site that is sacred to Warlpiri women of the Napangardi and Napanangka skin groups. Mina Mina is located well to the west of Yuendumu in the Tanami Desert, in country that features and is dominated by salt lakes, claypan soakages and sandhills.

The Dreaming describes the journey of a group of women of all ages who travelled east gathering food, collecting Ngalyipi (Tinospora smilacina or Snake Vine) and performing ceremonies as they travelled. The women began their journey at Mina Mina where Karlangu (digging sticks) emerged from the ground. Taking these implements the women travelled east creating Janyinki and other sites. Their journey took them eventually beyond Warlpiri country.

The ngalyipi vine grows up the trunks and limbs of the Kurrkara (Desert Oak, Allocasuarina decaisneana) trees. Ngalyipi is a sacred vine to Napangardi and Napanangka women and has many uses. It can be used as a ceremonial wrap, as a strap to carry parrajas (wooden bowls) that are laden with bush tucker, and as a tourniquet for headaches.

Major women artists, principally from the community of Yuendumu, have featured this important Dreaming story in their paintings. This story has many aspects associated with it – about the country, the ceremonial implements, and the dance of the Ancestral women, the journey as well as the materials collected. Therefore, the artists tend to focus on specific parts of the story for their paintings. This piece depicts the ceremony that was held by the Ancestral Spirits to create the area around Mina Mina.