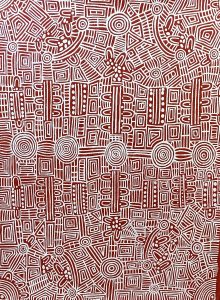 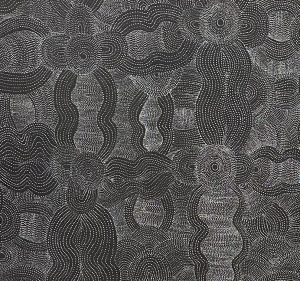 Doreen Dixon Nakamarra was born in 1965 she is a Walpiri woman living in the remote community of Willowra (Wirliyajarrayi), 250 km north-west of Alice Springs and 200 km from Yuendumu in the Northern Territory. She is closely related to artists Janet Long Nakamarra and Mary Nabarula. The Nakamarra women have, since the beginning of the Australian Aboriginal Art Movement in Central and Western Desert regions, contributed greatly to the popularity of art from these areas.

Doreen is one of the senior Warlpiri artists and is often an example to many young female artists in the community. She has participated in several exhibitions and her works can be found in galleries around the country. Her art depicts the Dreaming’s, culture and traditions of the tribes that inhibit this area. Doreen’s works include Women’s ceremonies, bush medicine and bush tucker gathering.