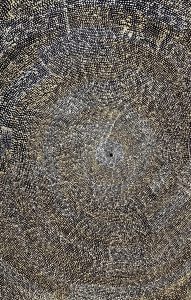 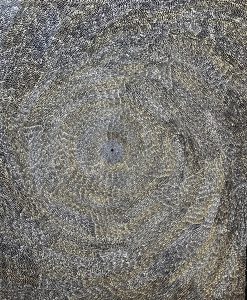 Julie Nangala Robinson was born in Yuendumu in 1973, Julie Nangala is one of five daughters of well-known Telstra Award-winning artist, Dorothy Napangardi. Since the late 1990s, while often in the company of her talented mother, Julie has pursued and developed a creative visual language all of her own, one which consists of a fascinating blend of stylised experimentation and ancient narrative.

Julie paints graphically minimal and contemporary designs of her country Pirlinyanu, a land of rocky outcrops and deep water springs. She has moved beyond traditional iconography and created her own visual language, making her an exciting and innovative artist to watch.

She paints Pirlinyanu, a water Dreaming site (Ngapa Jukurrpa) near Mina Mina, for which she is the traditional custodian. In recent years, she has started to paint on a regular basis and has exhibited in numerous group shows.

The site of Pirlinyarnu (Mt Farewell), is located about 165km west of Yuendumu in the Northern Territory. Two Jangala men, rainmakers, sang the rain, unleashing a giant storm that collided with another storm from Wapurtali. The two storms travelled across the country, from Kalimpinpa near Kintore. A Kirralanji (brown falcon) carried the storm further west until it dropped the storm at Pirlinyarnu, forming an enormous Maliri (lake). A mulju (water soakage) exists in this place today. At Puyurru the bird dug up a ‘warnayarra’ (rainbow serpent). The serpent carried water with it to create another large lake. Whenever it rains today hundreds of ‘ngapangarlpa’ (bush ducks) still flock to Pirlinyarnu. The ‘kirda’ (custodians) for this Jukurrpa (dreaming) are the Jangala/Jampijinpa men and Nangala/Nampijinpa women.