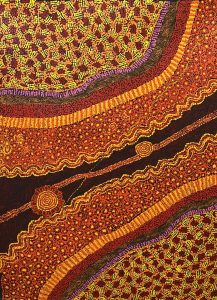 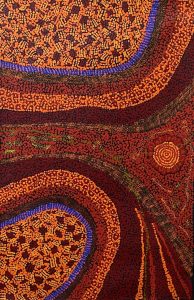 Gracie Ward Napaltjarri is a Pintupi/Ngaatjatjara woman from Warakurna, WA. Born in 1973, Gracie has had the honour of seeing the artworks produced since the early days of the Papunya Tula Art Movement (of which her father, George Ward Tjungurrayi, was a founding member) being created. George Ward Tjungurrayi is still considered one of the original masters of the Aboriginal Paintings movement.  As a small child, Gracie moved to Docker River and later to Warakurna in Western Australia.  With the encouragement of her well established artistic family, Gracie started painting in 2004. To begin with, she painted in a typical Pintupi dot style, but later in 2008, she captured in her paintings very bold striking colours.  Gracie’s creations are now about her grandmothers’ traditional homelands and the women’s ceremonies performed around women’s business.

This painting depicts designs associated with the rock hole site of Marrapinti, situated in a creek bed west of the Pollock Hills in Western Australia. The lines in this work represent the tali (sandhills) that surround the site.

A group of women of the Nangala and Napangardi kinship subsections camped at Marrapinti during their travels further east. While at the site, the women made nose bones, also known as marrapinti, worn through a hole made in the nose web. During ceremonies relating to Marrapinti, the older women pierced the nasal septums of the younger women participating in the ceremony. Both men and women initially used these nose bones but are now only inserted by the older generation on ceremonial occasions. Upon completing the ceremonies at Marrapinti, the women continued their journey east to Ngaminya and then to Wirrulnga before eventually travelling to Wilkinkarra (Lake Mackay).

Gracie has employed her painting style to express this story, having moved away from the intricate dot work used in her earlier works. She now creates her art using more textured, organic dotting. Using bright, bold colours as highlights throughout a bright and more traditional palette, Gracie has become one of the region’s most sought after younger artists.