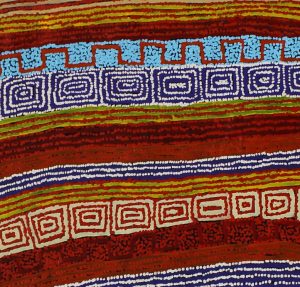 Patrick Tjungurrayi is a distinguished Pintupi artist and the winner of the 2008 Western Australian Indigenous Art Award, at the Art Gallery of Western Australia, Perth.  Born around 1943 at Yalangerri near Jupiter Well in the Western Desert, his work is distinguished by a dynamic contemporary abstraction that builds on the classic Papunya Tula cartographic style using a complex of intricately dotted square and circular forms and a vibrant colour palette.

Patrick Tjungurrayi grew up in the remote deserts of Western Australia learning the traditional nomadic skills for hunting and ceremony which were passed on by his family. The migrations that occurred amongst the Pintupi in the 1970s’ saw Tjungurrayi and his family relocate to Balgo Mission, then in 1981 to Walungurru (Kintore) (the hub for Pintupi art at the time) and finally in the mid1980s back to Balgo. It was at this time that he began to paint for Warlayirti Artists (under the name of Patrick Oloodoodi Tyjungurrayi), the new art centre, only to move to Kiwirrkurra in the early 1990s where he joined Papunya Tula artists and began painting regularly for them. Since then, he has painted both for Papunya Tula, Balgo and independent dealers in Alice Springs. His sister is established Balgo painter Elizabeth Nyumi Nungurrayi and his brother is the Papunya Tula painter, Brandy Tjungurrayi.

The subject of Tjungurrayi’s painting relate to his country of birth around Yalangerri.  Initially he painted in different styles, depending on whether he was painting for the Balgo art centre or for that at Kiwirrkurra. This has more recently  developed a hybrid of the two. In combining the colour of Balgo art with the geometry of the classic Papunya Tula style, his paintings symbolically reunite Anangu culture from around Wilkinkarra. His early subjects include Tingari, Rainbow Serpent, Thunderstorm and Lightning Dreamings, Rockholes and Soakages.