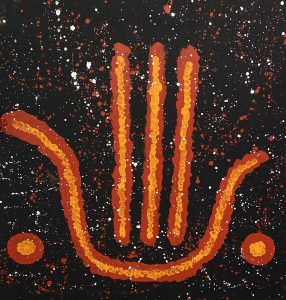 Michael Nelson Tjakamarra was born at Pikilyi (Vaughan Springs west of Yuendemu), in Central Australia.  He is a Walpiri and Luritja speaker and is a father of six girls and one boy, and has a wife, Marjorie.  Michael’s father was Walpiri and an important “Medicine Man” in the Yuendumu community.  When he was a boy, Michael was taught sand painting, body paintings and shield paintings by his grandfather.  He grew up “without clothes” and remembers hiding fearfully in the bush when he first saw white men.  After undergoing his first initiation rites at 13 years of age, he left school and worked as a buffalo shooter, truck driver and cattle drover, and was in the army.  After he moved to Papunya, he worked in the government store and later for the council.  He became well educated and a qualified JP who sat on the magistrate’s bench in court hearings at Papunya.