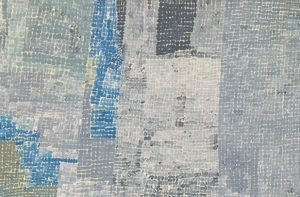 In these contemporary artworks, Carbiene McDonald Tjangala depicts four dreaming stories which he inherited from his father. Carbiene McDonald Tjangala was born in Papunya on 4th December 1961. His father is Snowy McDonald. He comes from a very artistic background; his sister is prominent Papunya Artist Martha McDonald. Carbiene however, didn’t begin his artistic practice until 2018 with Papunya Tjupi Artists. His recent exhibition with Raft Artspace in Alice Springs has been widely successful, most of the paintings in this show have already been sold. 2019 saw Carbiene catapult to mega artist status when he was awarded the richest art prize in Australia, the Hadley Art Prize!
These works are considerably more contemporary than artworks of some of his family members. Carbiene draws four sided shapes across the canvas and then fills these in with bold palettes of colour to depict a series of waterholes that can be found between Docker River and Kata Tjuta. They refer to sites at Petermann Ranges, Blood Ranges, Docker River and Kata Tjuta, of which his father would travel as a young man. During these travels, Carbiene tells us his father would often run into famed Central Australian Explorer, Lewis Hubert Lasseter. Carbiene recalls, with fondness, walking this same path with his father as a young man and says these were some of the happiest days of his life.
These memories stay with him vividly today.