Art has always been an important part of Aboriginal life as it reinforces the people to their land, their relationship to it and their culture.  Indigenous Art is about storytelling and preserving the culture for future generations, telling the creation and Dreamtime stories and keeping the culture alive. Australian and Oceanic Art Gallery plays a role in promoting contemporary Indigenous Art, with our featured artists.

Emily Kame Kngwarreye is one of Australia’s most significant contemporary artists. Emily was born at the beginning of the twentieth century and grew up in a remote desert area known as Utopia, 230 kilometres northeast of Alice Springs, distant from the art world that sought her work.

Although Emily began to paint late in her life she was a prolific artist who often worked at a pace that belied her advanced age. It is estimated that she produced over 3000 paintings in the course of her eight-year painting career — an average of one painting per day.

For virtually two-thirds of her life she had only sporadic contact with the outside world. It was not until she was about 80 that she became, almost overnight, an artist of national and international standing.

Her remarkable work was inspired by her cultural life as an Anmatyerre elder, and her lifelong custodianship of the women’s Dreaming sites in her clan Country, Alhalkere.

It was in Alhalkere that the essence of her being resided, it was her Dreaming that was the source of the creative power, of her knowledge. So profound was her identification with Alhalkere that it infused her life and her belief system, and governed her kinship relations and connections with other people. Alhalkere was the source of her paintings — her genius loci. Even physically, Emily’s pierced nose bore homage to the ancestor Alhalkere, a pierced rock standing on the Country of the same name.

Alhalkere was the place and the law that she continually re-created in her art. Emily Kame Kngwarreye’s visions of Alhalkere are her personal cultural legacy to the world. Whenever Emily was asked to explain her paintings, regardless of whether the images were a shimmering veil of dots, a field of ‘dump dump’ dots, raw stripes seared across the surface or elegant black lines, her answer was always the same:

The enactment of these strong cultural connections to her community and Country through kinship ties, ancestral history and law was an everyday practice that informed her art, making her life and art inseparable.

Link to  National Museum of Australia

Portfolio with an id of "emily-kngwarraye" is not defined.

Yannima Tommy Watson was a senior Pitjantjatara elder and law man of the Karima skin group. He was born around 1935 in Anumarapiti, 75 kilometres west of Irrunytju, also known as Wingellina, in Western Australia, near the junction of its border with the Northern Territory and South Australia. His traditional names of Yannima and Pikarli relate to specific sites near Anumarapiti.

From a young age Tommy learned the bush skills, travelling from water hole to water hole, hunting and gathering and living off the land.  Tommy’s parents and uncle died when he was very young and he was adopted by his father’s first cousin Nicodemus Watson and adopted the surname Watson in addition to his Aboriginal birth name.

Nicodemus Watson became a strong father figure. Together they travelled widely, and Watson learned the traditional skills required to lead a nomadic existence in the desert, including the fashioning of tools and weapons from trees using burning coals, how and what to hunt, and how and where to find water. He learned to understand the spiritual and tribal law teachings of his ancestors.

Watson’s first contact with white Australians was at the Ernabella Mission in South Australia, which opened in 1940. After a short time at Ernabella, he returned to his community to be initiated. Tommy Watson’s upbringing is similar to that of many Indigenous people born around the same time, from that point forward living a traditional nomadic existence until his early teens and then working as a stockman and labourer.

Tommy Watson began painting in 2001, and was one of a handful of painters establishing the Irrunytju community art centre in 2001.  His work, rich in the knowledge of the topographical landforms of his country and spiritual law that underlies it has received critical acclaim, both within Australia and internationally.  John MacDonald wrote in the Sydney Morning Herald that Watson “is a master of invention and arguably the outstanding painter of the Western Desert”, going on to compare his use of colour to Henri Matisse.  He painted the stories of his mothers and grandfathers country using large vibrant colours and layers of coloured dots.  Tommy has been associated with the “Colour Power’ movement that developed with the Indigenous art scene between 1984 and 2004.

Tommy Watson was one of eight Indigenous artists, alongside Paddy Bedford, John Mawurndjul, Ningura Napurrula, Lena Nyadbi, Michael Riley, Judy Watson and Gulumbu Yunupingu, who collaborated on a commission to provide works that decorate one of the Musée du quai Branly’s four buildings completed in 2006.

In 2014 the Art Series Hotel Group named Watson as the first Indigenous artist to feature in the collection.  Located in Adelaide, his namesake hotel The Watson features a collection of high-quality reproduction prints.

Watson himself stated that his art is an exploration of traditional Aboriginal culture, in which the land and spirituality are intertwined and communicated through stories passed on from generation to generation. He said, “I want to paint these stories so that others can learn and understand about our culture and country,” 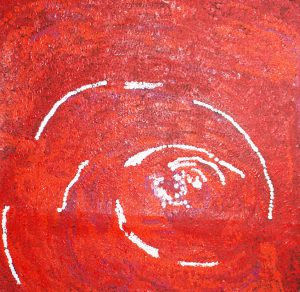 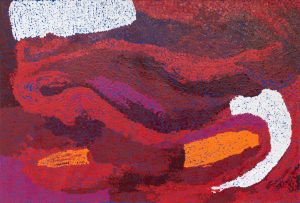 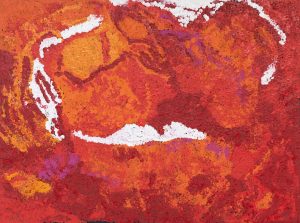 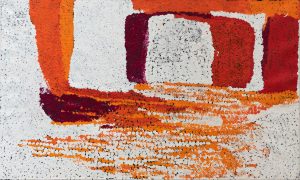 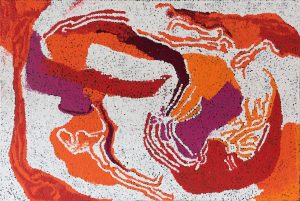 Our Featured Aboriginal Artist this month is Linda Syddick Napaltjarri, a Pintupi and Pitjantjatjara speaking Indigenous woman from the Western desert region.  She was part of the last generation of Pintupi people who grew up in a completely traditional nomadic life until she was eight when her family walked out of the desert to the Mission at Haast Bluff.

Linda’s father was killed by a revenge spearing when Linda was very young. Sometime later, her Mother married Shorty Lungkarta  Tjungarrayi, a prominent artist who significantly influenced Linda Syddicks artwork along with her Uncles Uta Uta Tjangala and Nosepeg Tjupurrula.  Linda married Musty Siddick and had two children, Ruby and Irene; she remarried after Musty’s death.

Linda Syddick took up painting in the early 1990s as part of the broader contemporary Indigenous Australian art movement.  She first exhibited in a private gallery in Alice Springs.  Her work is a fusion of traditional Aboriginal themes and motifs with Christian and Mission influences.

When they first travelled to the settlement at Mt Liebig, a Nangkari (witch doctor) travelled with them.  On seeing a windmill, he took it to be an evil spirit and attacked it with his magic.  Shorty Tjungarrayi, who had contact with the white settlers having worked with the army during the War, had seen a windmill and knew their purpose, persuaded the witchdoctor that it was not an evil spirit but brought water up from the ground. 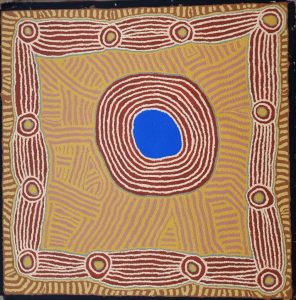 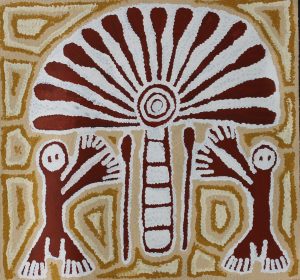 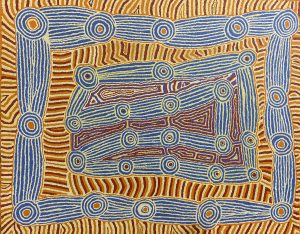 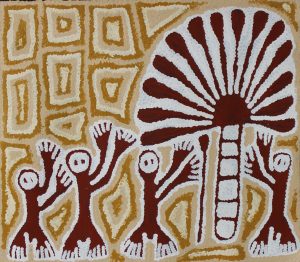 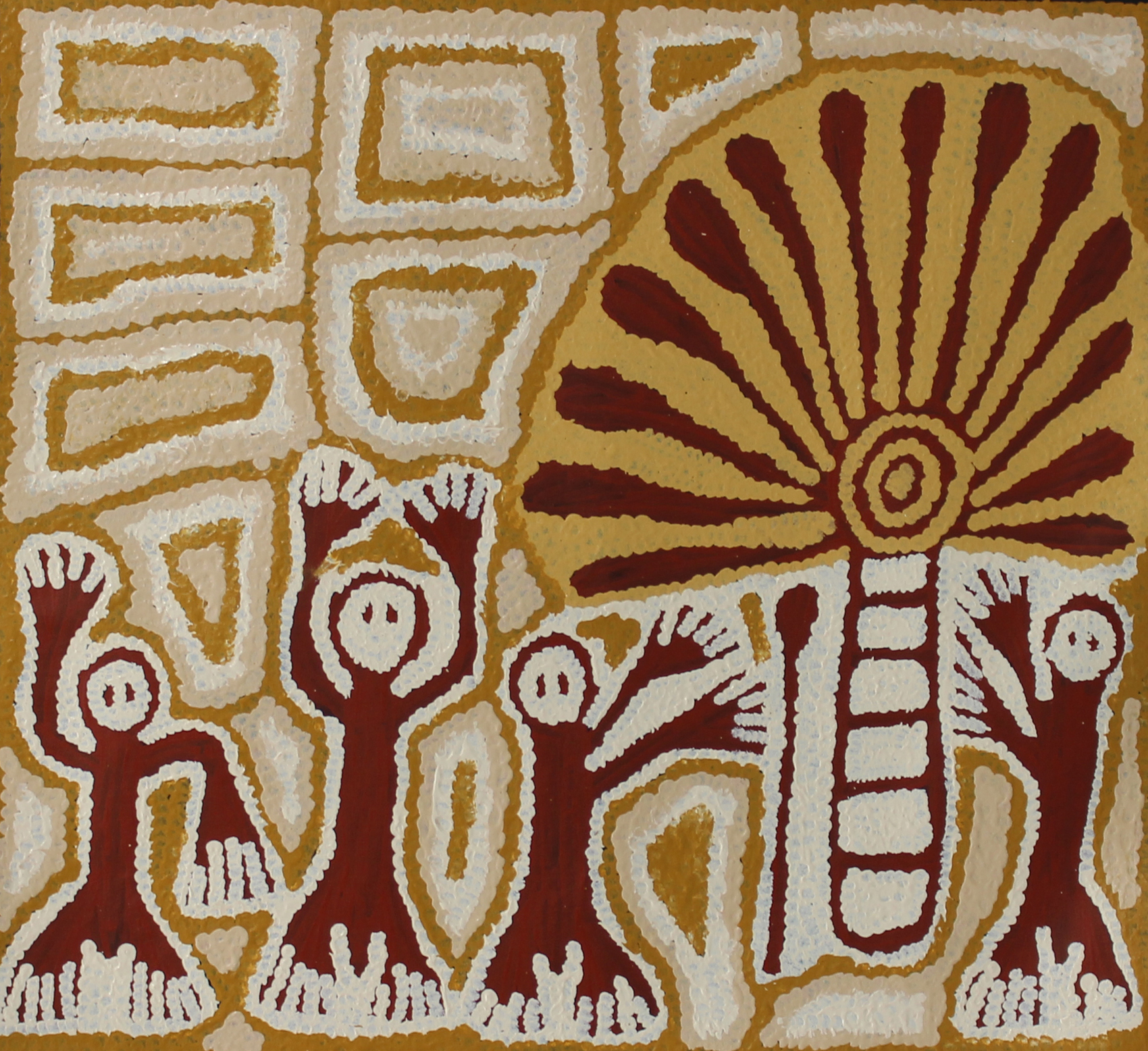 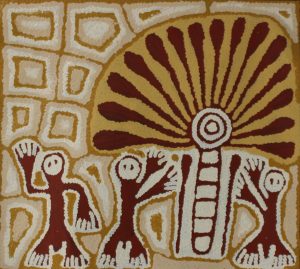 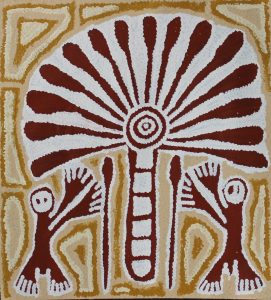 Contact us about our showcase of featured Indigenous artists.